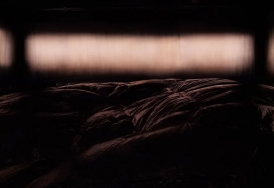 “In the performance the experience of the audience member becomes the substance of the stage.”

Flashdance is a show where darkness takes a material form. It is a show in which a plastic entity – the size of the whole stage area – transforms into a moving darkness. This entity turns into sculptural landscapes and forms impossible for the human body. It literally overshadows the spectator. The audience is faced with their limited ability to see and the boundless terrain of their imagination. Flashdance evokes that which is mysterious and unconscious. In Flashdance darkness does not need to be scary, it can also be your friend.

„Every viewer sees a performance of their own, which brings about many exceptional questions regarding the ontology of all performances. Flashdance is an impulse that either makes the audience independent or lonely.“ Niko Hallikainen, Okulaari

„Flashdance is a laboratory in the sense that the audience becomes more aware of their ways of looking instead of sinking into their own worlds.“ Maria Säkö, Helsingin Sanomat