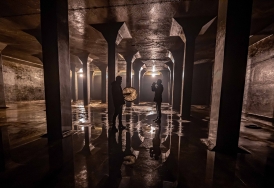 The project that was born this spring in the interwar water reservoirs of Žaliakalnis in Kaunas unfolded with a live concert during the opening concert of the "Nemuno7" project of "Kaunas - European Capital of Culture 2022" on the 22nd of May in Zapyškys, on the deck of the river dredger "Nemunas 7". This unique technical heritage built in 1965 in Czechoslovakia has been redeveloped into a cultural and event space as well as landscape design object, and it also became a live musical instrument for creators during the concert.

Kristijonas Lučinskas and Donatas Bielkauskas combined the recordings made in Kaunas reservoirs with original atmospheric music and repertoire songs performed by the mixed choir "Kamertonas" of the Kaunas Cultural Center and deconstructed by creators in search of interesting sounds and modern interpretation.

Music authors (with the help of percussionist Viktoras Rubežas) are developing the values ​​of the project "Nemuno7", which proclaim the necessity of water, sustainability, and dialogue. The dialogue that takes place between the history of industrial heritage and the modern listener, between traditional Lithuanian folk song and sonorous innovations, between the local community and professional artists.

The thread connecting the musical composition is water, as the source of all life, an essential element of the earth, a symbol of constant change. Underground, geological, human(s), visible - invisible, real or just felt... Rivers and currents of emotions, relationships, time, water, sand, gravel... All of them flow separately, intersect one with the other in others, they flow together, again separately and thus without slack. Rivers shape and influence each other. The interaction of all of them creates prerequisites for our existence.

During the concert in Klaipėda, the listeners will not only be able to hear the live concert, but also to watch the video film of the opening concert of "Nemuno7" on the cinema screen. And also to participate in the presentation of this concert record’s album "Nemunas seven" (12" / 180 gr vinyl). This is the debut album of the duo Tykumos, co-financed by AGATA and LATGA.

The closing of the festival this year coincides with the 20th anniversary of the Artist group "Fish Eye". Founded in 2022, association aims to unite professional artists and help them integrate into cultural life; encourage them to improve both in the field of ideas and technology; cooperate with promising artists from Lithuania and abroad; create opportunities to create new works by exploring interdisciplinary, interactive methods and non-traditional locations; to enable the audience to get acquainted with the contemporary art. In twenty years, the association has already implemented more than 30 art projects in public spaces, exhibitions, contributed to 30 modern dance productions, and constantly organizes various creative activities for the community. This year, the International Arts Festival PLArTFORMA was organized for the 16th time, and in 2012 based on the association, the contemporary dance theater "Šeiko dance company" has been established.

For more than a decade, the association has been an active partner of European and international projects. To note just a few: the EU and LCC funded project "SPARSE: Supporting & Promoting Arts in Rural Settlements of Europe", aiming on spreading professional art in the regions, is being implemented since 2018, the project "Body of Curiosity" aimed at developing a performing arts network for young people in the Nordic and Baltic countries; Nordic and Baltic contemporary dance network "kedja" or Central European performing arts network "DNA: Development of New Art", etc.